LegionFarm Group’s Community Manager Foksey here. If you’ve read our article about , then you can probably recall that I made a promise to give you more insights on some of our PRO players.

Today, I’m going to talk to you about cYpheR, a Na’Vi coach in Apex Legends. His real name is Alexei Yanushevsky, he is 29 y.o, born and currently living in Belarus. Alexei started his cybersports career at the age of 16 by playing Quake III. However, his popularity started rising in Quake IV, shortly after the game saw its launch. Ah, the good old times, right?

When he was just 16, Alexei qualified for the Electronic Sports World Cup in Belarus by beating a two-time world champion, Cooller. Alexei came in second at the tournament, quite impressive for that age. This led many people to call him a “Cybersports Wunderkind”. However, due to his young age, he was restricted from participating in some huge tournaments, even though he was more than qualified to do so. 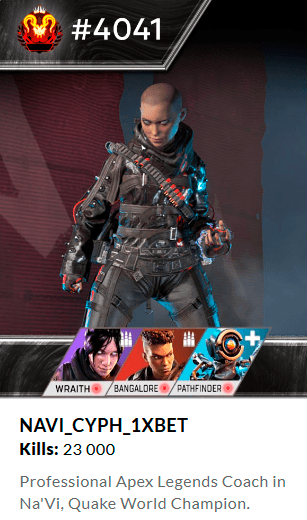 Alright, I’m not planning to dwell over his past achievements with you too much, there are just too many of them! Just know, this guy is a living, breathing Quake legend. Alexei has been a part of Fnatic, Serious Gaming, Millenium, Titan eSports, Infernal Gamerz, Virtus.pro, Nemiga Gaming, and finally, Na’Vi.

At one point, Quake started to fade as a popular cybersport discipline, the time came to move onto something else. cYpheR’s Apex Legends career started as a player on the Na’Vi main roster. But, two months later, he moved into a coaching position. His performance in the game has definitely been solid, and his Quake skills proving to be quite valuable in a battle royale type game.

However, Alexei recently stated that he believes he's at the sunset of his career. His original plan was to try his skills in everything possible and create something big before he hits 30. After this, he plans on devoting his time to improving the cybersports world. This is exactly why LFG and cYpheR are now united via our Play with a PRO service.

PwP is heavily focused on improving cybersports. We’re coaching new cyber athletes on a daily basis. Cybersports will become much more diverse and competitive as the number of professional players in-game increases. It’s safe to say that Alexei, with his previous experience as a professional cybersports team coach, is a great choice for anyone looking to enter the professional side of gaming.

We’re proud to have cYpheR as our Apex coaching professional. With people like him on our side, changing the future of cybersport doesn’t look like a miracle. New legends are born every day. If you want to know how to be good at Apex Legends - order a session with cYpheR!